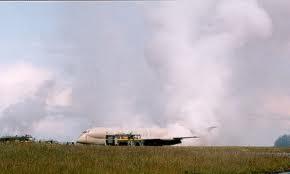 This is  a very well told story of a fire onboard Royal Air Force Nimrod MR2 XV257, with the actual transcript of the crew intercoms and radio transmissions, written by Mr Barry Wallond. Enjoy.

It was during an exercise at RAF St Mawgan on a summer’s day in 1984 that a Nimrod of 42 Squadron suffered the most serious emergency yet encountered with this aircraft type.

At 1040 SAC Barry Wallond, an Assistant Air Traffic Controller slid behind the wheel of his Land Rover and commenced an airfield inspection. His main objective was to check the runway for birds and Foreign Object Debris (FOD), to do this properly; he was exercise exempt and did not need to wear the dreaded respirator.

“I was protecting the take-off for a Nimrod which was now moving along the southern taxi-way. The weather was fine but we’d had recent rain and although the runway was damp, some areas of grass were water-logged and quite muddy. Due to the size of the runway (9,000ft long and 300ft wide) it required at least three runs to do it justice and by the third run, my Nimrod was already entering the runway and lining up. I simply drove off the far end into the overshoot and called vacated. I positioned the vehicle in a way that I could watch the take-off roll with binoculars, this was a scramble, already she was powering up – I could see the smoke! A few seconds later, nearly two miles away I was staring through the bino’s at a Nimrod head-on, racing over St Mawgan’s famous hump straight at me. At about the half way point the nose wheel left the ground followed shortly by the main gear, the time was 1100:10, she climbed fairly quickly and soon tucked up her undercarriage and flaps. I lost interest as she passed over the top out of view, distracted with other things going on across the airfield.
It was believed that she was already doomed, probably during the take-off roll or shortly after.”

This particular Nimrod MR2 (XV257) was configured as a Search and Rescue (SAR) standby for the Tactical Evaluation (TACEVAL) and as such was loaded with air-sea rescue equipment. A part of the load was several five inch illumination flares mounted on carriers at the rear of the bomb bay. These flares are made of magnesium and burn at a temperature in excess of 2,000°C to emit at least 13 million candle power for around 3 minutes. It was one of these flares that had during take-off become detached and dropped onto the closed bomb bay doors. As the aircraft left the circuit the Captain ordered ‘SAR checks outbound’ and with this the Navigator dutifully selected fusing for nose and tail on the flares. Within a few seconds deep in the belly of XV257 – it ignited

1102:40 Bomb bay fire alarm bell activates.
Captain: We have an ….. underfloor warning test of the bomb bay. Can we have a look at the bomb bay please?

1103:20
Air Traffic: SAREX 51 your Mayday acknowledged.
Captain: Push it back fast boys, airbrakes out, let’s get this thing on the ground.
Co-pilot: Yes, coming back, don’t worry.

At a height of 5,000ft, XV257 was put into a tight left turn
Air Traffic: SAREX 51 – steer 080 ….
Wing centre section overheat warning illuminates
AEO: It seems to be confined to the back end …

1103:30
Captain: OK, vacation of the aircraft will be from the front door at the moment so be prepared for a front door exit.
Aileron bay underfloor alarm bell rings
AEO: Front door copied.

1104:30
Captain (To Air Traffic): Mayday rescue 51 now has an underfloor warning in the aileron servo dyne bay as well.
Air Traffic: SAREX 51, Confirm this is not a practice?.

Captain
Mayday Rescue 51, no – this isn’t a fucking practice!!

1104:50
AEO: (extinguisher is) in the aileron bay, split pin removed. Smoke now entering the fuselage
AEO: Smoke in the fuselage, standing by to fire the fire extinguisher.
Total hydraulic system failure (main utility)
Captain (To Air Traffic): We now have smoke in the fuselage, intention’s land, shutdown all engines, vacate starboard front, and for Christ’s sake get everything ready!

On the ground Barry was watching the drama unfold before him.

“I was still positioned in the undershoot of 13 and with the next aircraft movement not due for another 45 minutes or so, I had turned down the Storno radio and was taking a well earned break. Within 5 minutes I spotted a Nimrod out to sea going like the clappers passing Newquay north bound. It was not a huge surprise as I had been told some time earlier it was to return with an exercise emergency (!) I turned up the radio and scanned the runway briefly, all in order. However, the radio was a complete babble of agitated and excited voices, it was difficult to understand what was going on until I heard ATC telling Crash Combine (Fire fighting vehicles) of ‘a fire in the bomb bay’, I now turned my attention back to the Nimrod, almost immediately the rear end light-up like a street lamp.
Just for the briefest of moments I thought ‘how did they do that?’ I still had exercise on the brain. Then something fell away burning, then something else, a few seconds passed and what appeared to be an explosion near the tail end and several bright burning bits of wreckage fell into the sea (these were in fact the 5 inch flares burning their way out of the aircraft). The bomb doors dropped into the down position at about the same time and the fire extended from the rear of the bomb bay back to an area adjacent to the middle of the fin and rudder.”

1105:00
Co-pilot: Undercarriage is travelling down. What’s the (touchdown) speed for me, Eng? Quick please.

Undercarriage has failed to lower

1106:00
Captain: Firing first shot …
Co-pilot: OK, I’m landing ……
Captain (to Air Traffic): OK, landing off this, we’ve now got a fire indication in number 2 engine….There’ a real fire in the bomb bay as far as we can see.
ATC: SAREX 51.
AEO: Second shot going, the aileron bay is full of smoke.

Barry continues, “She rolled out onto finals for runway 13, dragging her banner of fire and smoke across the sky. For the second time in just a few minutes she was again heading … straight at me! I couldn’t take my eyes off her, as I fumbled for the keys, I saw she had no gear (undercarriage), at less than 300ft it seemed to flop down, I never did get out of the way properly and for a brief moment my world slowed down as she flew over my Land rover at about 80ft, by now the flames were beyond the MAD boom,
a distance of over 40ft and the Clamshell door behind the bomb bay doors had also fallen open; it was a bloody miracle she was still flying. The roar of the flames was deafening as she passed over the top and numerous bits of burning aluminium fell all around me – some hitting my Land rover in the process, holing the roof and right wing, leaving varying sized scorch/burn marks and dents everywhere else, breaking a window knocking off a mirror and (my fault) crushing the off-side rear bumper reversing into the Cornish hedge. [sic:Mark Wardley MTSS, recently commented ‘one of the most heavily damaged Landrovers he had ever repaired’]
The landing in the circumstance was quite superb, I think the last of the flares fell on touchdown out at 130kts and skated several hundred feet down the runway in a most spectacular manner.”

Captain: In, running up.

Captain: The underfloor (fire) has moved to the elevator bay as expected – flow
AEO: AEO copied.
Co-pilot: We’ll stop here.
Captain: OK, everybody out, everybody out.

The Co-pilot had used up over 7,500ft to bring the aircraft under control then calmly turned off the runway onto ‘November south’ which let the wind to push the smoke away from the crew egress point and allowed St Mawgan to keep the main runway open for further emergencies. As the aircraft came to a halt the crew threw open the front right hand exit door, deployed the escape rope attached to the roof of the door frame and began to slide down to safety. This was very much a two handed operation and it was noted that one aircrew missed the rope altogether and landed heavily 10 feet below as he was clutching his Nav bag!

The Crash crew arrived promptly and fought the flames with much enthusiasm and bravery, saving the aircraft from total destruction.

Meanwhile, Barry had extricated his Land rover from the Cornish stone wall that he‘d reversed into moments ago and then chased down the runway after XV257.
“Normally I would have kept well out of the way of burning aeroplanes but on this occasion I was carrying my camera. I arrived shortly after the Fire engines and took 22 photographs for the records. These are the only known pictures taken of the incident. After leaving the scene I returned to air traffic and after parking up my wounded truck, I was walking through the door, I heard the off-side front tyre ‘let go’ with a loud ‘pop’. A few days later I learnt that the seat of the flames where under a 650 gallon fuel tank which had swollen to the point of exploding. If this tank had gone, it would have certainly broken the fuselage in two at the rear of the bomb bay, resulting in a catastrophic failure of the airframe.
Against all the odds XV257 made it back to base and landed safely with several different emergencies on-going at the same time, this was in no small part due to the teamwork displayed by the aircrew, the firemen and a touch of ‘lady luck’. An engineering officer told me later that after inspecting the damage ‘forget the fuel tank bursting or the controls severed and inoperable, this aircraft just would not have lasted another 2 minutes without complete structural failure’.
To this day, when I see a Nimrod I always look at the bomb bay and think of XV257”

For well over a year she was in 404 hangar undergoing repairs for a one-off flight to RAE Woodford. She was flown there with a volunteer crew with no bomb bay doors and the undercarriage locked and pinned in the down position. She was to have been rebuilt as an AEW version of the Nimrod and re-enter service 3 years later. Sadly as she was near to completion she was destroyed when the roof of the hangar collapsed during gale force winds.